INTO THE WATER – Paula Hawkins

Much expected from the successful author of  highly proclaimed THE GIRL on the TRAIN! 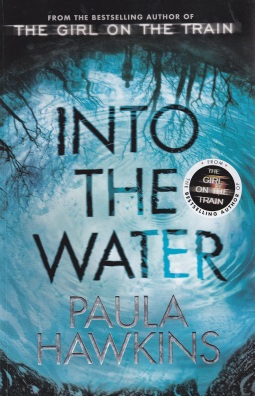 A small community living on a river bank flanked by a cliff is, and has been, a site for drowning women as far back as the days of the witches. Hence the local name, “The Drowning Pool”.

Fifteen year old Lena’s best friend joins the list, and worse, Lena’s mother, Nel, with a compulsive interest in the history of the pool, is soon also a victim. Nel’s sister Jules, having ignored several calls from her estranged sibling, arrives to try and reconcile her own bitter past relationship with her memory of Nel. It begins to dawn on her that, ill-equipped as she is, she now must also take responsibility for Lena. And Lena doesn’t like or trust her.

The characters are each quite well sketched, but to my mind there are too many of them. I won’t list them as that would require an explanation as to how they all fit together, and that would drown the reader in the pool as well. Ten-plus points-of-view; so that none blossom completely. If I have to pick a hero, it won’t be Jules who seems to be put forward as the main protagonist, but Lena who behaves with a maturity beyond her years.

It is not a spoiler to assume that the drownings are not all suicides, as is at first supposed, but the police are involved in the investigation, and in the story, in more ways than one.

If I was handing out merit stars, three would be my max.

My thanks to Penguin Random House, South Africa for this review copy.

Writer of thriller novels. 6 Published: 'Purgatory Road', 'The Barros Pawns', and the Detective Dice Modise Series:'Hunter's Venom - #1' 'Medicinal Purposes Only - #2', and 'Children Apart - #3; and 'Tribes of Hillbrow'; all from Southern Africa.
View all posts by peterjearle →
This entry was posted in Book Reviews, Crime, Whodunnit and tagged Into The Water, Paula Hawkins. Bookmark the permalink.